I was fascinated by the story of the Netherlands destroyer Banckert. My plan was to make a model in the design as japanese escort P-106. I had in mind the option to design it such that a small series kit can be made. Let's see...

In February 1942 the Banckert fought together with the van Ghent against the Japanese invasion in Palembang. End of February, she was so badly damaged that it was abandoned 2.3.42. For this purpose, they were fired from the submarine K-XVIII with the onboard gun. The Japanese raised and rebuilt it as patrol boat 106. (P-106 or PB-106 is just a Western designation) However, it was not completely finished. After the war the Dutch Navy sunk it as a target ship.

Typical start of a project: Investigation. This showed that the status at the end of WW2 is not really clear. There is one known original picture as PB-106:
http://en.wikipedia.org/wiki/File:IJN_PB106-1946.jpg 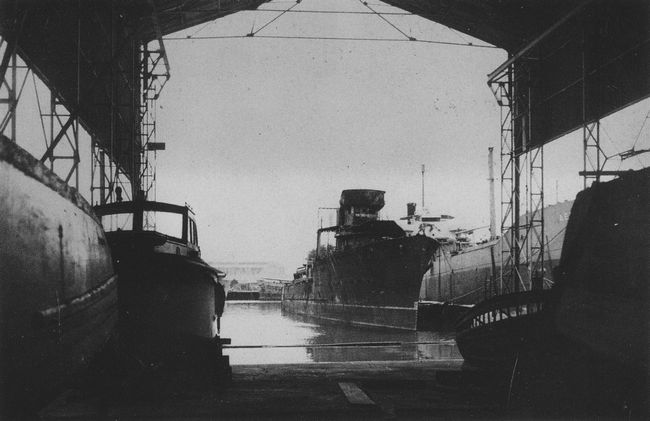 According to HP Models a sketch was published in a publication in the '70s who mentions the P-106 as a carrier of two landing craft. They also have 12 x 2.5cm Flak worn (probably 4x3). This coincides with the technical specifications in http://www.navypedia.org/ships/japan/jap_esc_banckert.htm .

From this information, in conjunction with the known picture, I come to the following conclusions:

Overall, this results in the new interpretation: 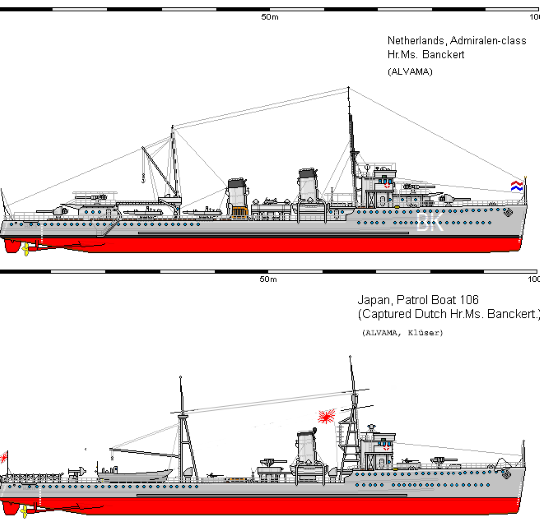 The structures behind the rear mast were removed. 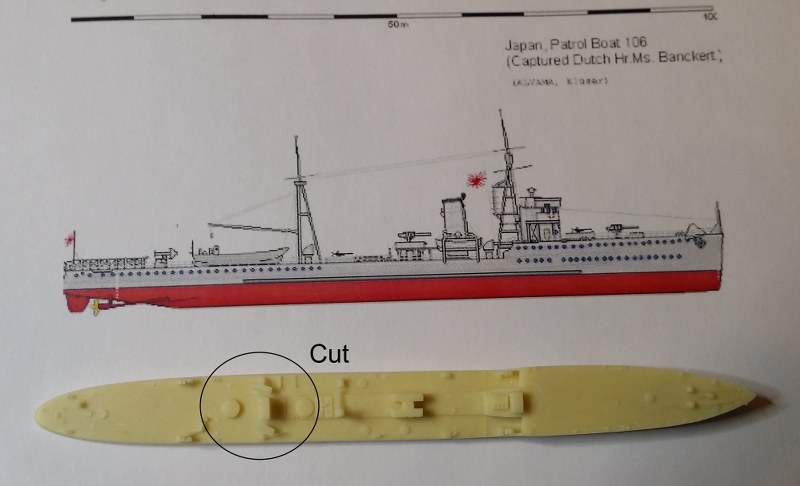 Bridge of the HP kit, forward funnel and middle gun platform were mounted.

Gun platforms on Japanese destroyers and Escorts typically were supported on their sides. These things I have modeled by fitting cut metal strip. Of course spares parts can be used, too - or even strips of paper.

The headlights platform is shown neither on the drawing origin, nor do they correspond in shape to Japanese customs. I have omitted them therefore. Small refinements like ladders from etched parts to be added in due course.

Then the two Japanese 8 cm guns were mounted. Just as some of the following parts can be taken from the quite cheap Japanese destroyers or escort ships kits. I prefer Pitroad kits (partly with the inscription Skywave). In these a standard sprue is often settled on which are all standard small parts such as guns, boats, or even the famous 2.5cm triple AA. This casting sprues are also sold separately. Instead Pitroad also an older Fujimi kit or the like can be used, of course the quality then might be very different. 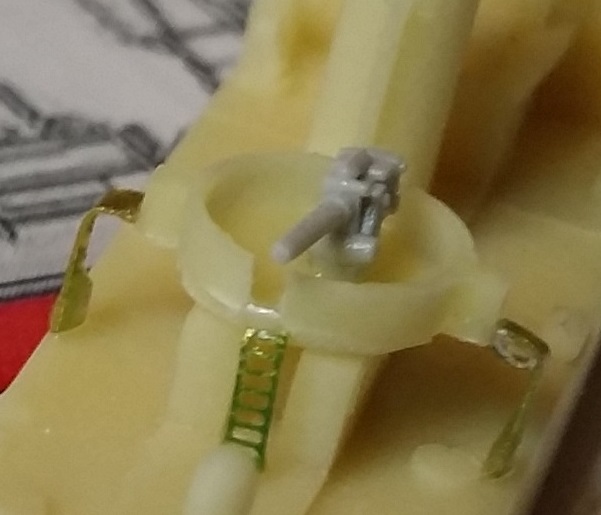 The exact shape of the AA platforms is not known. I therefore took such platforms of a Japanese destroyer. The exact location can be seen in the sketch. The Banckert was damaged by gunfire and was tilted and capsized along with its dock. It is therefore impossible that the dinghies have survived this without damage. Certainly new boats of Japanese design were planned. Accordingly, the two come from a small parts sprue of Pitroad. The davits are from the HP Banckert Kit. They fit well. However, there was a small mistake in my drawing, the davits should be oriented outward. 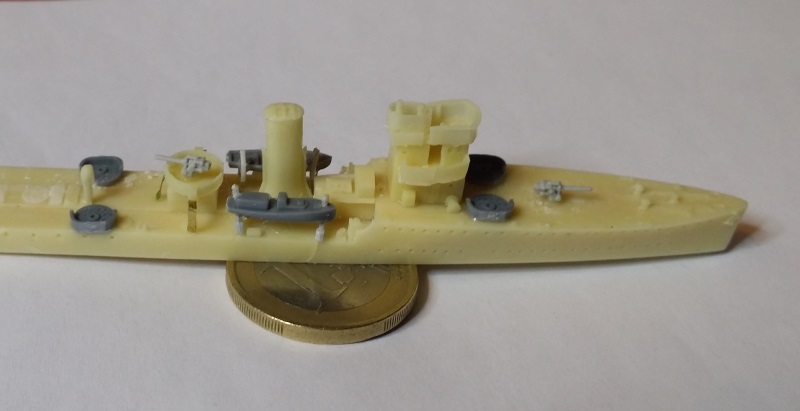 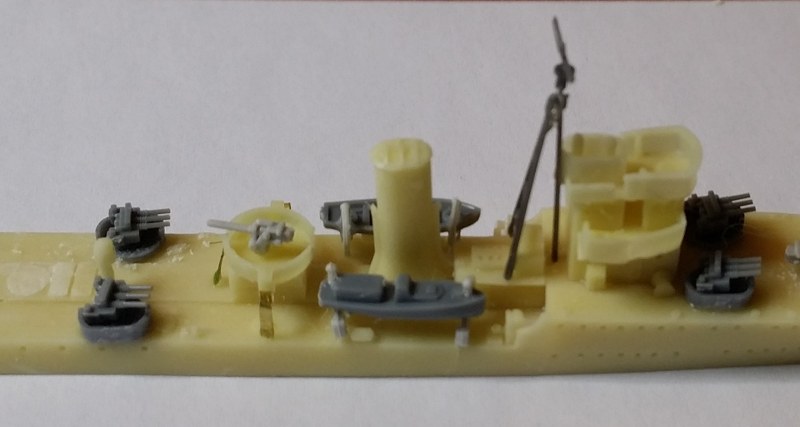 Now the Daihatsu were mounted. This helps in finding the right place for the small parts in the aft area. 14m Daihatsus can be found in different kits. I prefer the Tamiya Japanese Military Transport Set. It is of high quality, available and provides many further goodies.

Removing the depth charge throwers could already have been done in the first step above.

Comparison of the depth charge racks and throwers with the Hiburi. 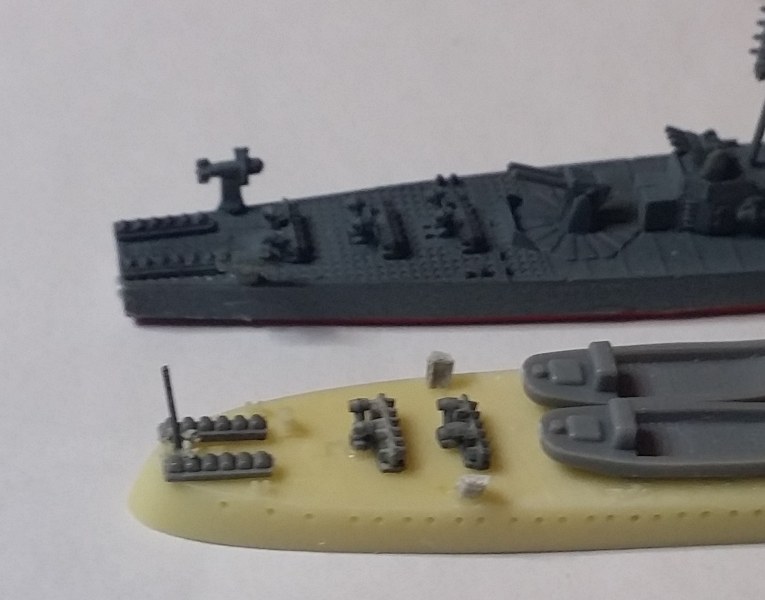 Preparation of the aft mast. 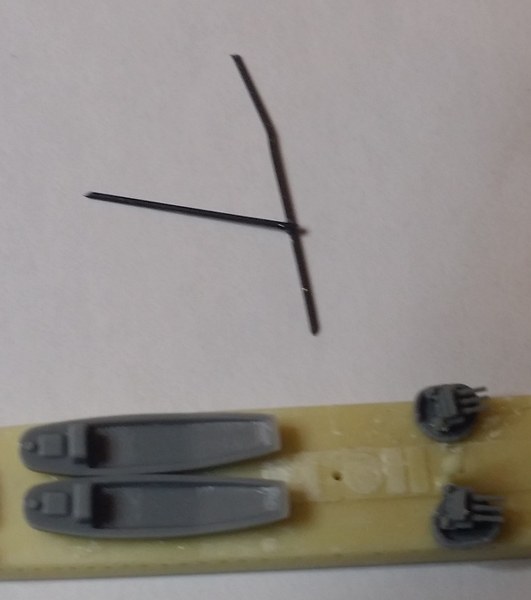 Completion of the masts. I've taken different wire strengths that I just go with a pair of pliers. With thin wires I roll the wire with a protractor on a smooth non-slip pad. The poles are wrong - this is intentional. Attachment of the radar: I'm a little gone higher than on the drawing. The eye of the derrick hawser is still to be bent.

Then already it's the time for some color. Japanese ships were almost entirely in a dark blue-gray. On destroyers also the deck was painted in that color. Sometimes there were also deck sections, which were covered with a linoleum whose color was kind of Orange / light brown. Boats were mostly covered with a plan. Start of war the color of the plan was white, later typically beige.

Handrails mounted and first pic shot. Several manufacturers offer hand rails in 1/700. I prefer the Saemann Ätztechnik. They are bit to high, but for me great in handling. As a glue for rails I use Gator Acrylic Glue. 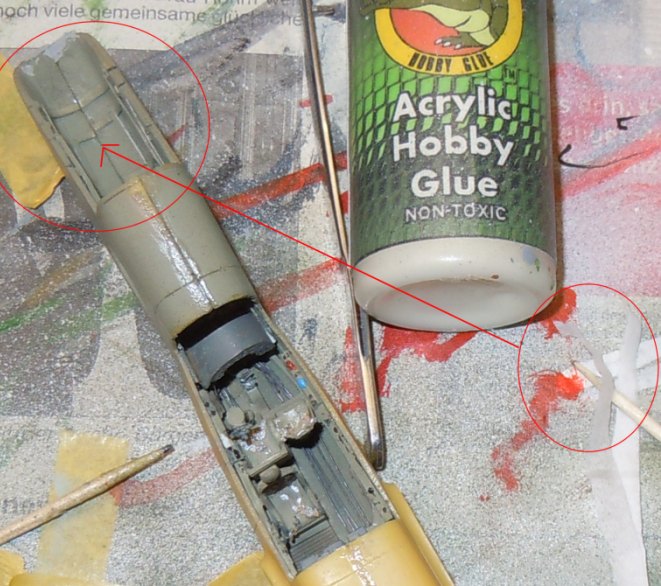 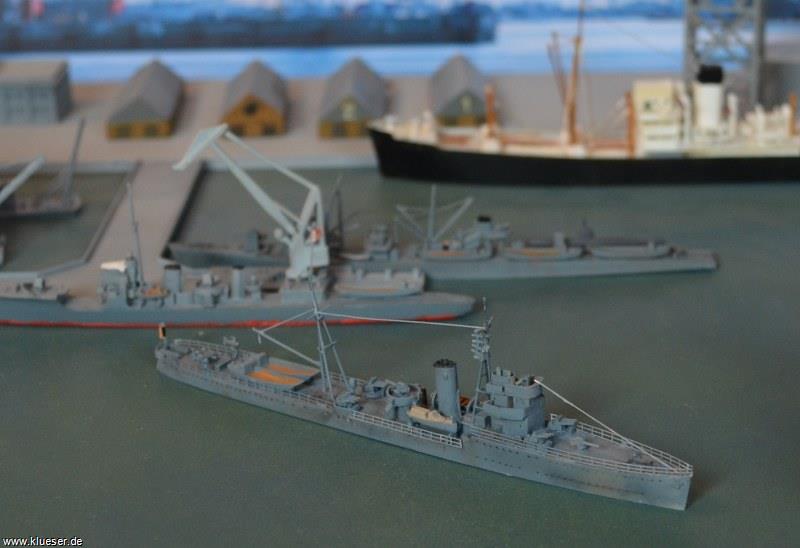 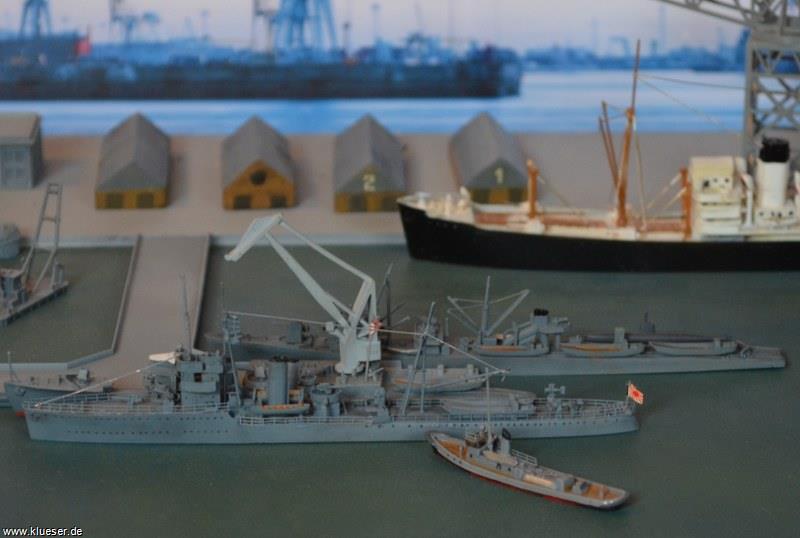